In How the Mighty Fall, author Jim Collins answers the question, “How can large successful companies fail after decades of growth and stability?” Tim Irwin asks a similar question about leaders in his new book, Derailed: Five Lessons Learned from Catastrophic Failures of Leadership (Thomas Nelson, 2009). In a moment, I will tell you how to get a free copy. 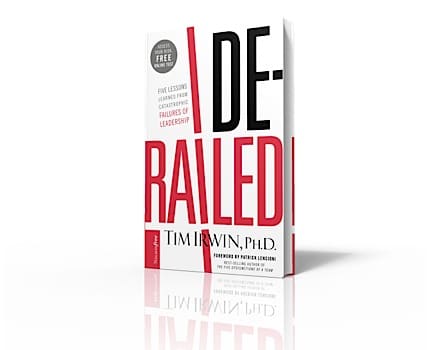 In his Preface (p. xiii), Patrick Lencioni, author or The Five Dysfunctions of a Team, writes,

In my work as a consultant, I can honestly say I have never discovered a company I thought was just too dumb to succeed. Nor have I yet found a CEO whom I felt would have been great if only he or she were smarter.”

Irwin goes on to develop the case that the real issue is character, the lack of which is why otherwise talented leaders ultimately fail.

As I mentioned in my post, “Five Characteristics of Weak Leaders,” you often learn more from negative examples that positive ones. This is certainly true here.

This is a sobering, often disturbing, book. I found it thoroughly compelling—so much so that I read it through in two sittings. It led me to ask some very tough questions about my own leadership.

Irwin begins by profiling six leaders of well-known, public companies. These leaders were all smart, tough, and accomplished. Nevertheless, they all succumbed to serious character flaws, which ultimately resulted in them either stepping down or being ousted by their boards. These leaders include:

“Though expressed in a variety of behaviors,” Irwin writes, “they are all tied to a lack of failure of one of these four critical qualities” (p. 17):

Irwin’s goal in profiling these leaders is to show how derailment occurs. If that were all that he did, this book would be incredibly instructive and helpful. However, he doesn’t stop there. The second half of the book is designed to help leaders avoid a cataclysmic train wreck in their our own lives.

In this section of the book, Irwin explains that derailment doesn’t happen overnight. It is a long process. He argues that “derailed leaders progress through five stages as they head toward their demise.” Each of these become the subject of a single chapter:

The good news is that if you can detect these attitudes and behaviors in your own life, you have a fighting chance of staying on track and leaving a positive leadership legacy. If you want to know how vulnerable you are to the behaviors that lead to derailment, take the free Derailed Online Assessment.

This is not just a book for CEOs. It is for anyone who serves in a leadership capacity—pastors, teachers, government officials, and even mid-level managers in corporations. Not only is this a book you should read; in my opinion, it’s a book you can’t afford not to read. There is simply too much at stake.

Although I loved the whole book, my favorite chapter is the next to the last, where Irwin summarizes the “lessons learned.” These hit me the hardest. The chapter summarizes the succinct yet gritty realities that make us fail or thrive as leaders. I know I will refer to these often.

In order to “seed the market for this book,” I am going to give away 100 copies free. To get a chance at snagging one, you must take the following three actions:

On Friday, November 13, I will select 100 people, based solely on my arbitrary and subjective evaluation of their comments. If you are one of those selected, Lindsey Nobles on my team will notify you via email. If you don’t hear from her, you can assume you didn’t make the cut.

Also, we are making this book available as a NelsonFree title. This means that if you buy the book—or even get one free—you can also download all three electronic versions of the book: a PDF of the book, the Amazon Kindle version, and the audio version. There is no additional charge for these.

Update: I have closed the comments and selected the people who will receive the free books. I originally said I would give away 100 copies. However, I am sending a copy to every single person who made a comment, filled out the special request form—more than 200!—and Twittered or Facebooked a link to the post. Thanks for your participation.
Disclosure of Material Connection: Some of the links in the post above are “affiliate links.” This means if you click on the link and purchase the item, I will receive an affiliate commission. Regardless, I only recommend products or services I use personally and believe will add value to my readers. I am disclosing this in accordance with the Federal Trade Commission’s 16 CFR, Part 255: “Guides Concerning the Use of Endorsements and Testimonials in Advertising.