For the past several months, I have been thinking about starting a mentoring group. As a result, I have bought several books on the topic. However, the best one I have read so far is Mentor Like Jesus by Regi Campbell. In a moment, I will tell you how to get a free copy. 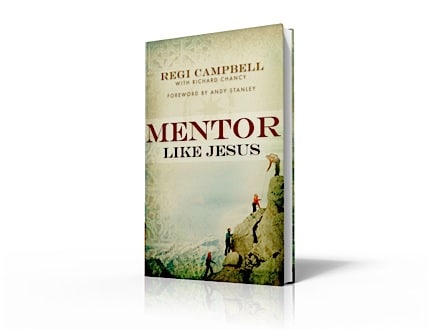 As I was thinking about starting my group, I looked at numerous models, including Seth Godin’s special (and very innovative) internship program. Based on that and some other input, I developed a a fairly detailed plan that I was very excited about.

I was all set to issue an invitation to my program when a friend suggested I read Regi’s book. Boy, am I glad I did. It made me re-think everything. As a result, I have now taken an entirely different tack. I plan to blog more about this later this week.

Here’s the problem: We traditionally think of mentoring as having the following characteristics:

In Mentor Like Jesus, Regi turns all of this on its head by simply looking at the example of Jesus. He says,

We have visualized Jesus as CEO, Jesus as an environmentalist, and even thought about what Jesus’ politics might have been. But in reality … in history … regardless of your religious beliefs, Jesus was a mentor.

He then goes on to describe the eleven characteristics of what he calls Next Generation Mentoring. Each of these are the subject of a separate chapter.

If you are thinking about mentoring, you must read this book. It is relatively short—only 152 pages—but revolutionary. It is my prayer that it launches a movement. I hope I can play a small role here by giving you a sense of its potential.

Just to prove how valuable I think this book is, I am recommending it to you despite the fact that it was published by B&H Publishing Group, one of my company’s competitors! However, they have graciously made 100 copies of Mentor Like Jesus available to my readers. To get a chance at snagging one, you must take the following three actions:

On Monday, November 30, I will select 100 people, based solely on my arbitrary and subjective evaluation of their comments. If you are one of those selected, Lindsey Nobles on my team will notify you via email. If you don’t hear from her, you can assume you didn’t make the cut.

Update: If you are interested in joining a mentoring group, read this.

Question: Why do you want a copy of this book?
Disclosure of Material Connection: Some of the links in the post above are “affiliate links.” This means if you click on the link and purchase the item, I will receive an affiliate commission. Regardless, I only recommend products or services I use personally and believe will add value to my readers. I am disclosing this in accordance with the Federal Trade Commission’s 16 CFR, Part 255: “Guides Concerning the Use of Endorsements and Testimonials in Advertising.