When I was twenty-nine years old, I became vice president of marketing for Thomas Nelson. It was a huge step up in my career. At the time, I thought I had arrived at the pinnacle of success. 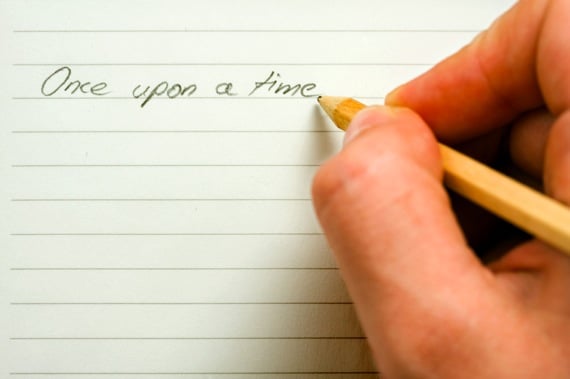 But I was in over my head. Or at least that’s the way it felt. I was just waiting for other people to come to the same conclusion.

I struggled constantly with anxiety and fear—anxiety was the daytime version; fear was the nighttime version.

This manifest itself in my body in two embarrassing ways: First, I sweat profusely. Second, my hands were always cold—ice cold.

Before attending important meetings, I would wear two t-shirts, hoping that I wouldn’t sweat through both. I strategically selected my clothing, based on which colors would show the least amount of perspiration.

I would also step into the bathroom right before the meeting began, and frantically run hot water over my hands. I would then dry them vigorously, praying that they would warm up. I dreaded having to shake hands with anyone.

At some point, I realized that the problem was not in my body, but in my head. I was telling myself a bad story. Mine went like this:

You are too young for this job. Worse, you don’t have the experience. Who do you think you are fooling? It’s just a matter of time before everyone in the company sees it. When that happens, you will be out on the street—right where you should have been all along.

I would never say this out loud, of course. It was just the sound-track that was playing inside my head.

Things didn’t change until I became aware of the story and took control of the narrative. I started telling myself a different story.

I think almost every problem we experience can be traced back to the stories we tell ourselves. There may be a good reason for these stories, but in the end they produce bad outcomes.

It comes down to this: Change your story, change your life.

Let me suggest five ways to take control of the narrative in your head:

Once I realize that this is what had happened to me, I crafted a new story. Mine went like this:

Yes, you are young. That gives you tremendous energy. You also don’t have a lot of experience, which is why it is easier for you to think outside the box. God has provided everything you need to be successful in this situation. Even if you fail, you will learn something from it. You can’t lose; you can only quit. And you most certainly are not a quitter!

This changed everything for me. It didn’t happen overnight, but more quickly than I expected. The physical symptoms gradually disappeared. Now, instead of focusing on the behavior I want to change, I focus on the story I am telling myself.

How do you think your behavior or outcomes are linked to the story you are telling yourself? You can leave a comment by clicking here.
Disclosure of Material Connection: Some of the links in the post above are “affiliate links.” This means if you click on the link and purchase the item, I will receive an affiliate commission. Regardless, I only recommend products or services I use personally and believe will add value to my readers. I am disclosing this in accordance with the Federal Trade Commission’s 16 CFR, Part 255: “Guides Concerning the Use of Endorsements and Testimonials in Advertising.