Great results don’t just happen. You don’t usually drift to a destination you would have chosen. Instead, you have to be intentional, force yourself to get clear on what you want and why it’s important, and then pursue a plan of action that accomplishes your objective.

Sometimes, this involves setting an achievement goal with a definable end point, such as finishing a book, running a marathon, or hitting a financial benchmark. But often, significant achievements are the result of ingrained habits over time.

Bill and Nancy have an awesome marriage. It’s not just that they were lucky and married the right person. It’s that they have intentionally cultivated intimacy. As simple as it sounds, they have gone on a date night every week for more than two decades. This habit has provided a context in which they can have deep, meaningful conversations about the things that matter most.

Spencer is in the best shape of his life. Whenever he goes in for his annual physical, his doctor is amazed. He has continued to improve for each of the last five years. The surprising thing is that Spencer just turned sixty last year. But his health is not an accident. It all began when he began to cultivate the habit of working out five days a week.

Or take Larissa. She has built a seven-figure business in just three years. You might be tempted to write off her success to the fact that she stumbled onto a great idea at exactly the right time. Certainly, that played a role. But if you asked her the secret to her success, she would chalk it up to her habit of making five sales calls every single week.

In all these cases, habits are the driving force.

If you have been through my course, 5 Days to Your Best Year Ever, you know that to realize your dreams, you must reduce them to written goals that meet the SMARTER standard. By that I mean they are specific, measurable, actionable, risky, time-keyed, exciting, and relevant.

Usually, these are achievement goals like the book and marathon examples above. But we can also employ habits in making our dreams real, just like Spencer and Larissa. The trick is to know when and how to use them.

When to Use a Habit

Habits are an effective way to achieve your dreams, but only if you know when and how to use them. There are two times when you can use a habit in goal-setting.

How to Use a Habit

State the habit—whether it’s a habit goal or a habit step—using the SMARTER framework. This is very similar to how you would state an achievement goal with a few important changes. Take a closer look at the last example:

Log what I am eating in MyFitnessPal, every day, immediately after each meal or at the end of the day, beginning January 1, and do it for 70 days straight.

It’s specific, measurable, and actionable. It’s also risky. Not the goal itself. Usually, it is something that, on its own, is pretty easy. The risk is in being consistent over the prescribed period of time.

It’s also time-keyed. But unlike an achievement goal where you merely have a deadline—for instance, finish my book by March 1—your habit goals and steps need four time-keys:

Great results don’t just happen. You have to be intentional.Michael Hyatt

How to Track a Habit

It’s one thing to write down a streak target. It’s another to keep track of it. Like all tools or systems, use the one that works for you. This could be a check-mark on your calendar. Jerry Seinfeld famously used this system to build his writing habit. You can also track it in your journal or set it as recurring task in your task-management system.

Currently, I am using—and loving!—Habit Bull. It is available for both iOS and Android devices. It is based on the Seinfeld’s method. Specifically, it allows you to: 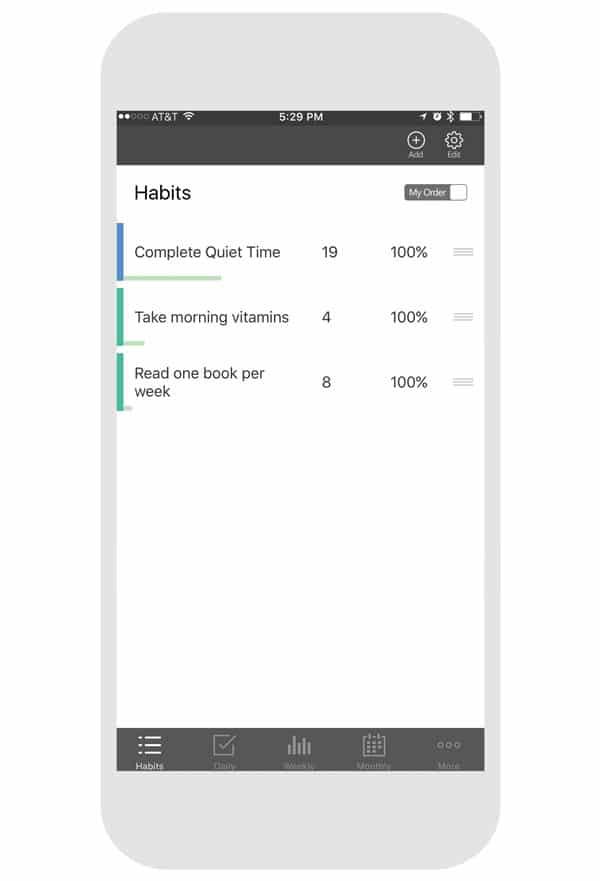 There are a million ways to achieve our dreams. Developing habits that serve our goals is one you can add to your portfolio and put to work today.

Question: What is the most helpful habit you’ve developed in the last year? What’s the most important habit you would like to develop in the coming year? Share your answer on Facebook, Twitter, or LinkedIn.