One of my favorite marketing gurus, David Ogilvy, once wrote, “Great marketing only makes a bad product fail faster.” How true. 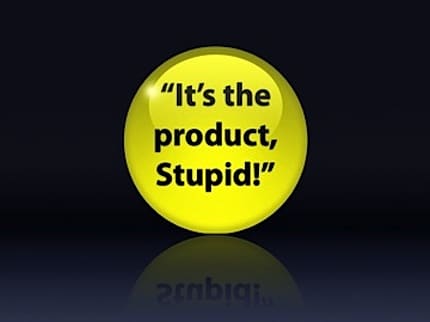 I have argued for years that, “It’s the product, Stupid.” The secret to success in any business is to deliver a great, compelling product. No amount of marketing savvy, salesmanship, or operational excellence can overcome a weak product. This is especially true when it comes to publishing.

The purpose of marketing is to get a book launched—to prime the pump. But if people don’t want to read it and—more importantly—if they won’t recommend it to their friends, you’re hosed. You can’t spend enough money or be creative enough to overcome a lack of word-of-mouth marketing.In light of this, it was fascinating to watch Apple’s introduction of the iPhone last week. Like millions of other Mac fans, I read all the articles and even worked my way through Apple’s slick, interactive Web site. I thought to myself, Very cool. I definitely want one of these. But I also thought, I can wait until the second generation. Let them work the bugs out first.

But then I watched Steve Job’s keynote presentation from MacWorld. (You can download this for free from iTunes. If you are involved in any aspect of product development, this is a must-watch video.) Almost immediately, I fell under his spell. You really have to watch Steve demo this product to fully appreciate it. It’s mind-blowing.

I think there are at least three things that any company can learn from Steve’s keynote:

It’s time to get the passion back. We have to raise the standard. We have to shoot for the moon. We need to push one another and our authors to deliver great manuscripts. That’s where it starts. We have to create head-turning packaging. We must publish books that we are delighted—yes, delighted!—to read ourselves and proud to pass on to others.

If we would do that, think how much easier everything else becomes. Apple spent a fortune on product development. But they haven’t yet spent much on marketing. Nevertheless, they got more press coverage than the entire Consumer Electronics Show that was going on simultaneously in Las Vegas. They have proven beyond a shadow of a doubt that “It’s the product, Stupid.” Let’s take a lesson from their play book.