A few years ago, a woman approached me after I finished a keynote presentation. In the speech, I had mentioned the importance of living with intention.

That point made an impression. She realized she had not been intentional, particularly as it related to her career.

As it turns out, she was a doctor with a very successful practice. She was extremely busy and making more money than she had dreamed possible. But she was deeply unsatisfied.

“If I’m honest, I think I became a doctor because my father was a doctor. It was expected. I didn’t think I had a choice,” she confessed. Then her eyes welled with tears.

“But I hate it,” she continued. “I only get to spend a few minutes with each patient. I feel like a factory worker on a conveyor belt. It’s all I can do to make myself go to work.”

She was good at what she did. Her practice was exploding. But she had lost her passion.

As I later reflected on her situation, I realized job satisfaction requires three components.

If you have all three of these components, you can experience genuine career satisfaction. Few things in life are more rewarding.

I envision it as three overlapping circles. (Jim Collins has a similar model in Good to Great as it applies to companies.) At the intersection of all three is true success. 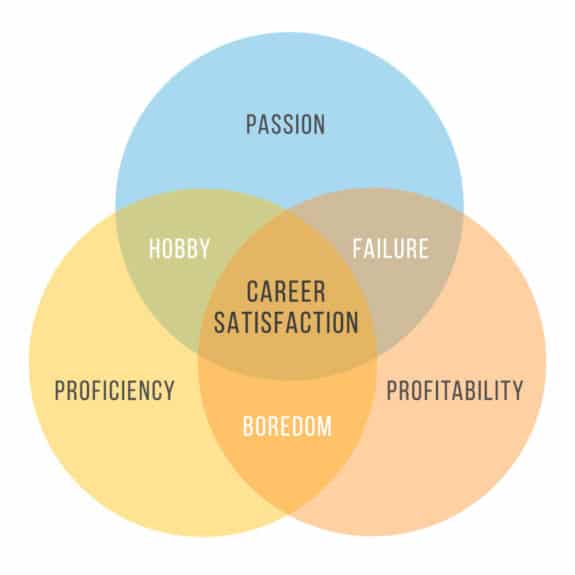 Be wary of only having two:

You can get by for a time with only two of the three elements I have described. Sometimes, for instance, it takes a while to build proficiency. Other times we invest our best efforts believing that profitability will follow.

But that can’t work forever. If you want to succeed at the deepest level, you must eventually incorporate all three components.

Few things in life are more rewarding than marketable work fueled by passion and competence.Michael Hyatt

A while back I heard from a doctor in a similar situation as the one from before. She worked for a major corporate practice. It was like a factory with patients on a conveyor belt.

She hated it. She had zero passion for her job. So she quit!

She started a boutique family practice of her own. Instead of the constant pressure to see more patients each day than the last, she now has fewer patients and can spend more time with each.

And guess what? She’s reconnected with her passion and loving her work again. That’s the kind of difference being intentional about our careers can make.

Question: Do you possess all three of these components? Which is missing? What could you do to become more satisfied in your work? Share your answer on Facebook, Twitter, or LinkedIn.