The Amazon Kindle is not the ultimate eBook reader, but it is a giant step in the right direction. After using one heavily over the last 24 hours, I have found much that I like, things I don’t like, and a clearer vision for what the next eBook device should include. 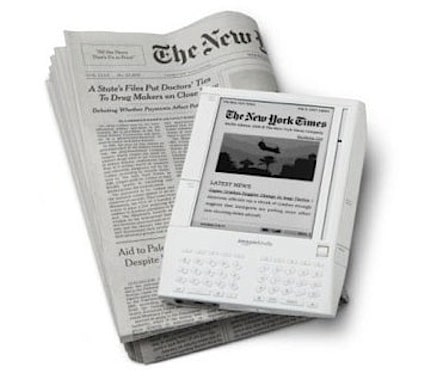 Interestingly, most of the people complaining about the Kindle have not even tried it. It is almost as if the mere existence of the device—and it’s possible impact on traditional books—affects them in some strange, primal way.At any rate, I have now read almost an entire book on the Kindle. Appropriately enough, I started with Print Is Dead by Jeff Gomez. (I hope to review the book in a subsequent post.) I have also downloaded The Kite Runner by Khaled Hosseini, because I also want to experience a novel on the Kindle. I will report back once I have finished both books.

It’s important to state at the outset that the Kindle is not so much an eBook as it is a portable bookstore. By itself, it’s not that unique. It is certainly not a major advance over, say, the Sony Reader. But the device is only half the equation. The fact that it is connected wirelessly to Amazon’s bookstore is what gives the Kindle its edge and makes it different from everything that has gone before.

Several people have written dogmatically that this device will never catch on. They may be right; only time will tell. But Amazon sold out their complete inventory on the first day. They are not saying how many units they sold, but suffice it to say there is more demand for this than either they or the naysayers thought.

Here are the features I like in no particular order:

Overall, I like the Kindle. I can honestly see myself reading most of my books on this device. This is the first time I have been willing to say that. Time will tell. However, there is still room for improvement.

As much as I would love for Apple to build the ultimate device, I don’t think it will happen. Why? Because even if they did, they would only have one half of the equation—the device. To really make it successful, they would need access to the content. And, this takes relationships with publishers, something Amazon has and Apple doesn’t.

This is also why Amazon has taken three years to get this product to market. It has taken that long to get the Luddite-minded publishers on-board. (I say this as one of them.) Apple has not been talking to us at Thomas Nelson, and we are one of the largest publishers in the country. So I have to assume they aren’t talking to anyone else either.

Some have suggested that Apple could just partner with Google and offer the thousands of books that Google has scanned from major libraries. You can be sure that won’t happen. Authors and agents already have a major lawsuit against Google. If Google—or Apple—tried to use this material without compensating authors and publishers, they would be buried in thousands of lawsuits.

So for now, Amazon is the best hope for really creating a break-through device. I hope they can make it work. The possibilities are very exciting. But regardless, I believe they have moved the ball forward in a major way. We are closer than ever to a digital replacement for the book.