Last Friday, I had the privilege of hearing General Tommy Franks speak at the Spur Leadership Conference in Austin, Texas. I was standing in the “green room” visiting with one of our authors when General Franks entered the room with his wife, Cathy. He stuck out his hand and said, “Hi, my name’s Tom.” I liked him immediately. 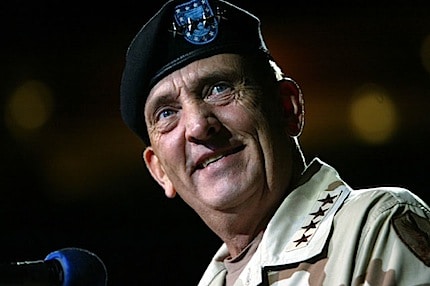 The way he carried himself made an unforgettable impression on me. First, he was clearly “large and in charge.” He was in a business suit, but you just knew he was a general. He exuded leadership. Second, he was warm and self-effacing. He also clearly adored his wife and bragged on the fact that they had been married for forty years.

I would not describe his speech as eloquent or profound. However, it was filled with the kind of common sense that today seems to be all too uncommon. I was totally captivated by his stories. He had the kind of wisdom that only comes from leaders who have been through many battles and been forced to make the kind of gut-wrenching decisions between bad and worse.

I will tell you one story that I recorded in my journal. He flunked out of the University of Texas in 1967. Rather than wait to be drafted to fight in Vietnam, he enlisted in the Army. As he got on the bus to leave for boot camp, his father said, “Son, I have one piece of advice. Be feisty.”

Later in the Q&A session, General Franks told the story of a young lieutenant who declared his intention to one day become a General himself. He asked, “Could you share with me the one thing I can do to advance my career and achieve this goal?”

“That’s right,” General Franks explained. “If you can’t take responsibility for your own life and show up on time, you have no right leading anyone else. Don’t ever be late.”

Question: What’s one leadership lesson you learned from your dad?
Disclosure of Material Connection: Some of the links in the post above are “affiliate links.” This means if you click on the link and purchase the item, I will receive an affiliate commission. Regardless, I only recommend products or services I use personally and believe will add value to my readers. I am disclosing this in accordance with the Federal Trade Commission’s 16 CFR, Part 255: “Guides Concerning the Use of Endorsements and Testimonials in Advertising.