I can tell you with some precision the moment I first doubted group brainstorming. This was many moons ago. A medium sized media firm that wanted to grow much larger had engaged my consulting services. They held a company-wide powwow, flying most of the managers and yours truly to corporate headquarters in Darkest Peru.

The CEO was a good speaker. He shared his vision for the company in broad strokes. He then invited us to help build on that by filling out post-it notes and placing them all over the room – grouped by category and recorded via camera phones for future use. He read all of these suggestions off. The ideas ranged from well-meaning but wrong to curious to useful. He used them to build a head of steam and most left the confab more excited about their jobs than when they arrived.

We were excited because it was fun. His enthusiasm was infectious and he was saying we, collectively, were the solution to the company’s problems. But an annoying little voice in the back of my head kept saying, “You know, I’m just not sure this will work.”

The reason my inner hopeful realist piped up was that most of the suggestions didn’t really address the problems that were limiting the company’s growth. Most of the ideas weren’t bad. Some of them were even quite good. But the bulk of them seemed unlikely to significantly advance the company’s larger objective of getting to the next level.

The same conversation that took place in my noggin also happened to Google’s Jake Knapp. Except it wasn’t HIS inner voice and it happened during a meeting. “Improving team processes” at Google had “became an obsession for me,” he writes in the book Sprint. 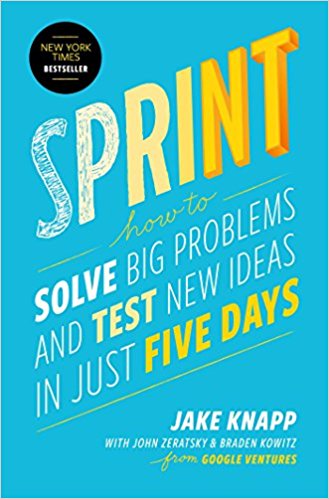 Knapp’s first attempts at improving company processes were a familiar corporate tactic. He got teams of engineers together for brainstorming workshops, and most everyone genuinely seemed to enjoy it. “Group brainstorming, where everyone shouts out ideas, is a lot of fun. After a few hours together, we have a big pile of sticky notes and everyone would be in great spirits,” Knapp explains.

But then something unexpected happened: “One day, in the middle of a brainstorm, an engineer interrupted the process. ‘How do you know brainstorming works?’ he asked.”

Knapp confesses that he “wasn’t sure what to say” and that the truth of the matter was “embarrassing.” He had been dutifully surveying brainstormers to measure if they “enjoyed the workshops,” yet he hadn’t been measuring, well, “the actual results.”

So he took a hard look and didn’t like what he found. After reviewing the results from all the workshops that he had held, he “noticed a problem.” Namely, the ideas that “went on to launch and become successful were not generated in the shout-out-loud brainstorms” that he had been championing.

Rather, the best ideas were generated in response to great challenge under time pressure, and usually by an individual puzzling it out while occasionally consulting colleagues. “When the excitement of the workshop was over,” Knapp explains, “the brainstorm ideas just couldn’t compete.”

Don’t throw the brain out with the bathwater

This is not a plea to abandon all brainstorming. We keep at it because sometimes it works and enough of us have seen it work. People start throwing out ideas and something sparks and it leads to an undeniably good outcome.

Knapp himself didn’t think the tactic should be altogether abandoned. Instead, he incorporated a kind of structured brainstorming with sorting functions into his Sprint framework for developing prototypes that he went on to champion at Google Ventures.

But Knapp rightly noticed both that there are many limits to brainstorming and that we tend to oversell its successes. If we want to get the most out of brainstorming, then we ought to be aware of these limits. The three that stand out are:

1. Brainstorming is susceptible to social pressure

If the right answer to, “How can we increase productivity?” is “Fire Wally” and Wally is at that meeting, this suggestion is unlikely to emerge from brainstorming. Similarly, if the boss is there and people know he doesn’t like a certain idea, even though it’s a good one, they’re unlikely to do much more than hint in that direction—if they’re feeling particularly brave.

If we want to get the most out of brainstorming, we need to be aware of these limits.Jeremy Lott

2. Brainstorming can add too much clutter

The problem is not that people will come up with too many bad ideas but that they will come up with an overwhelming number of suggestions. This can lead to decision fatigue by the person or persons tasked with sifting through the lists for diamonds and ponies.

3. Brainstorming takes the place of thinking

Too often, rather than sitting down, taking the time, really focusing on a problem to puzzle it out, we decide that’s too hard and schedule a brainstorming session instead.

Now certainly, if we’re really stuck after real effort, we should seek help. But to default to unstructured brainstorming is a mistake. We are robbing ourselves of the chance to do our best work. And we are expecting our coworkers to be miracle workers as we drag them into yet another meeting.