After I finished reading Born to Run by Christopher McDougall, I bought a pair of Vibram FiveFingers shoes. I have been running in them now for five weeks. I am loving them. The only negative is that I am continuously having to explain them to curious strangers. In fact, three people stopped me today in the space of three miles. 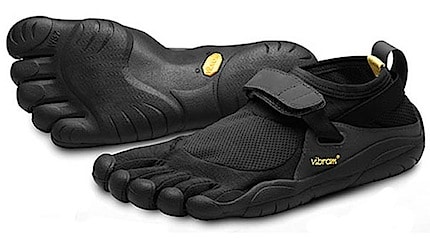 As a result, I thought it would be helpful to share my responses to the nine most common questions I get. If you’re thinking about buying a pair, maybe this will help you.

If you are a runner, I think the FiveFingers merit serious consideration, particularly if you have been prone to injuries and tried everything else. If you are still not convinced, I would urge to read Born to Run. Even if you don’t buy into running barefoot, it is still one of the best running books I have read.

Question: Do you have the Vibrams? Are you running in them? What has been your experience? You can leave a comment by clicking here.
Disclosure of Material Connection: Some of the links in the post above are “affiliate links.” This means if you click on the link and purchase the item, I will receive an affiliate commission. Regardless, I only recommend products or services I use personally and believe will add value to my readers. I am disclosing this in accordance with the Federal Trade Commission’s 16 CFR, Part 255: “Guides Concerning the Use of Endorsements and Testimonials in Advertising.