I have been using task-management software since the late 90s, when I first installed a program developed by Franklin-Covey. Since then, I have tried almost every system available, including Things, Remember the Milk, OmniFocus, Midnight Inbox, iGTD, Wunderlist, and many more. 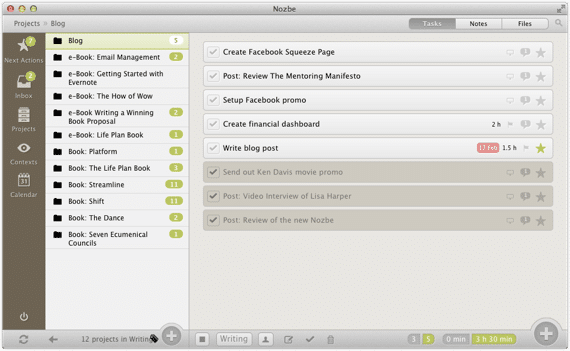 But the one I have used for more than four years is Nozbe. In my view, nothing else comes close. The company just released a new desktop version (both Windows and Mac), which I have been beta-testing for the past few months.

If you are looking for a task management software tool—or are tired of the limitations of the one you have—here are eight reasons you should consider Nozbe:

The more I use Nozbe, the more I am impressed. It’s not perfect—and it’s not the least expensive—but it is better than anything else I have found on the market. The product is at once simple to use and yet full of numerous, advanced features. It is the only task management system I feel comfortable recommending.

The app itself is free. Nozbe makes its money by charging a subscription fee to sync your data between devices. It is worth every penny. However, you can try this service risk-free for sixty days. You can download the free Nozbe desktop apps (Mac and Windows) from the Nozbe home page.