It’s never a good idea to criticize your boss in public. It’s an even worse idea to talk about him or her to the media. If you do, don’t be surprised if you get fired. You were asking for it. 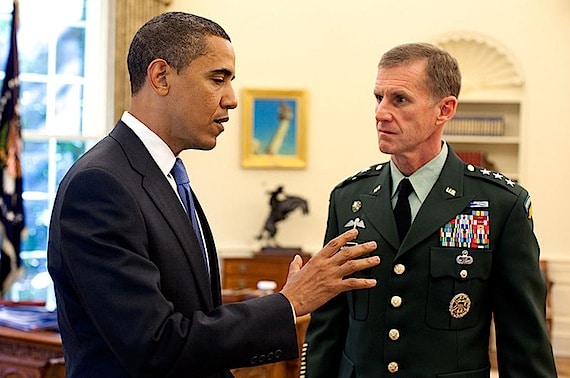 For the last two days, I have watched with amazement as the drama with Gen. Stanley McChrystal has unfolded. Before this happened, I don’t think I even knew his name. In case you’re in the same position, let me provide a little background.

A little more than a year ago, President Obama appointed Gen. McChrystal to lead the war effort in Afghanistan. He is a graduate of West Point and spent the five years before his current appointment running the Pentagon’s most secretive “black ops.” He is renowned for saying out loud what other military officers are afraid to even think—one of the reasons President Obama cited as the rationale for appointing him.

But this time he went too far. He gave a series of interviews to Rolling Stone magazine [warning: vulgar language] in which he criticized several prominent officials in the Administration, including the Vice President and even the President himself.

I have seen this attitude many times in my career. Believe me. I understand the frustration. I have worked for plenty of knuckleheads and been tempted to criticize them publicly myself. But I have never seen it result in anything positive. As Solomon observed millennia ago,

People in authority eventually find out. And when they do, you might discover you are not so indispensable after all. As a result, I will be shocked—and, frankly, disappointed—if the President doesn’t fire Gen. McChrystal.

If you have a problem with your boss, let me suggest an alternative approach:

This really comes down to a matter of integrity. Even if your boss is incompetent, you have the duty to respect him (see Romans 13:1–7). If you can’t do that, you need to resign. Speaking out publicly, while you are still employed, is not an option.

Questions: Have you ever faced this predicament? How did you respond?
Disclosure of Material Connection: Some of the links in the post above are “affiliate links.” This means if you click on the link and purchase the item, I will receive an affiliate commission. Regardless, I only recommend products or services I use personally and believe will add value to my readers. I am disclosing this in accordance with the Federal Trade Commission’s 16 CFR, Part 255: “Guides Concerning the Use of Endorsements and Testimonials in Advertising.