You already know that busywork does nothing more than create the perception that people are working harder than they really are. In fact, 65 percent of your colleagues surveyed by Havas Worldwide felt that people were simply pretending to be busy.

Nor does busywork make you or your company more productive. What you get instead are weekly meetings that generate more doodles than productive activity, reports that provide little more than clutter for hard drives and desks, and “urgent requests” that suck time away from actual goal achievement.

Yet busywork remains a problem for most workplaces. This is a legacy passed on by management scientists who fostered the kind of micromanaging that leads to busywork. Add in the reality that work cultures often prioritize looking busy over being productive. It is little wonder that busywork continues to plague us.

The consequence of micromanagement

You know all too well the scenes from Office Space in which the coffee-swilling Bill Lumbergh berates Peter Gibbons for forgetting to attach a cover page to his TPS reports, because you have lived it. It can be the monthly “progress report” detailing every task, the software test report that spends more time on inputs than on results, or even the log books law firm partners and associates fill out every day in order to track “billable hours.” 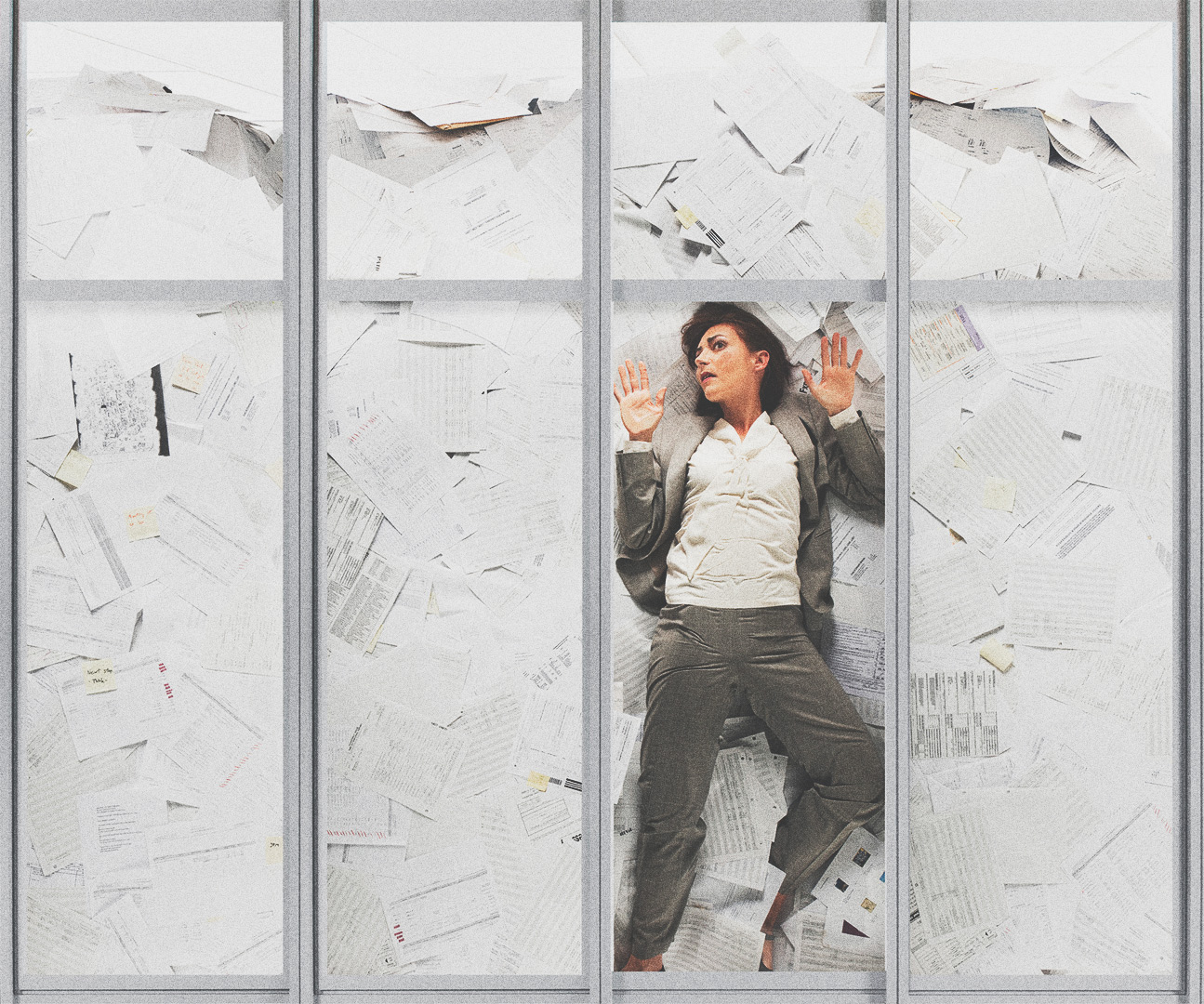 The volumes of paperwork and endless meetings that fill up our days didn’t exist before the 20th century. Then came Frederick Winslow Taylor and so-called scientific management. It was driven as much by distrust of workers as by the legitimate need to more-efficiently pump out more products. Taylor and his disciples thought micromanaging employees and measuring their work was critical to making workplaces efficient. Over time, this approach evolved from time and motion studies to the timesheets, the memos and the meetings we all know so well.

Eventually, it became clear that all that micromanaging and minute tracking didn’t lead to higher levels of productivity. The paperwork, focused primarily on inputs, provided little information on what workers (and ultimately, companies) were achieving and how. The meetings, more about command-and-control than about productive activity, end up crowding out time for real innovation.

Busywork encourages people to appear busy even when what they do achieves nothing. It also begets more meetings, paperwork and activity-tracking, especially as managers and others complain about a lack of productivity. Most importantly, busywork is a symptom of distrust within organizations and does real harm in this age of knowledge workers. As Robert Galford and Anne Siebold Drapeau point out, the inability of institutions and managers to trust employees is a reason why success is often elusive.

When looking busy is most-important

Taylorism may no longer be in vogue. But the paperwork and meetings, along with the distrust and pantomime of work, remain because institutional cultures encourage it.

As human resources consultant Jordan Cohen and Julian Birkenshaw of the London Business School point out, professionals they surveyed admitted that they spend two-thirds of their time writing meaningless reports and shooting off emails (as well as trying to get colleagues engaged in the same tasks to get work done). They are afraid to stop doing busywork because their managers and colleagues reward looking productive over, well, being productive.

Numerous studies have proven that poorly-structured meetings, input-driven reports, and never-ending threads of emails (along with the drive-bys and other interruptions from colleagues and bosses) sap away the precious time needed for the innovation and creativity that can help your company grow. Yet like the aforementioned Lumbergh in Office Space, companies often emphasis those very rituals in the name of being “team players.”

One of the culprits lies in the jockeying for advancement among lower-level executives and middle managers, who often have different priorities than those in the corporate suite and in the cubicles. Their attempts to prove that they are fulfilling the goals set at the top (another form of what I call Corporate Kremlinology) often ends up leading to zealous micromanaging and mundane make-work activities that waste everyone’s time.

A workplace structured for work would disincentivize busywork. Short and quick progress reports would only be issued, let’s say, quarterly—and only about matters that are relevant to performance. Meetings would be limited to one day a week, with those organizing them taking the steps to make them shorter and more focused. Memos should embrace Elmore Leonard’s rule of not providing unnecessary information. Managers would be incentivized to create uninterrupted time for themselves to do their own work—and rewarded for making sure their staffs do the same.

The workplace makes it hard to say no. Colleagues and bosses prefer you to say yes even when they realize that the requests are unnecessary.Rishawn Biddle

Ending busywork starts from the corporate suite and filters all the way down through the enterprise, which can be a slow process. But there are plenty of steps that can be taken to achieve this goal. One way is to empower people to say no to tasks and interruptions that create busywork in the first place.

The workplace makes it hard to say no. Colleagues and bosses prefer you to say yes even when they realize that the requests are unnecessary. Shared calendars make it easy for colleagues to intrude on your day by sending invites to meetings that even they know you don’t need to be on.

Companies can make it easier to say no by requiring everyone to set office hours one day a week during which colleagues and others can make requests. That forces colleagues to think through whether or not their requests are important—and allows everyone to spend less time on tasks that do nothing for innovation, creativity, profit, or success.