Last Friday, I watched the Tiger Woods press conference in amazement. I was stunned at his candor. He didn’t sugar-coat his sin. Instead, he repeatedly acknowledged the magnitude of his wrongdoing and the scope of its impact.

If you can’t see this video in your RSS reader or email, then click here.

It is worth reading or watching the statement in its entirety. It contains several important lessons. However, these three paragraphs summed up his thoughts:

The issue involved here was my repeated irresponsible behavior. I was unfaithful. I had affairs. I cheated. What I did is not acceptable. And I am the only person to blame. I stopped living by the core values that I was taught to believe in.

“I knew my actions were wrong. But I convinced myself that normal rules didn’t apply. I never thought about who I was hurting. Instead, I thought only about myself. I ran straight through the boundaries that a married couple should live by. I thought I could get away with whatever I wanted to. I felt that I had worked hard my entire life and deserved to enjoy all the temptations around me. I felt I was entitled. Thanks to money and fame, I didn’t have to go far to find them.

“I was wrong. I was foolish. I don’t get to play by different rules. The same boundaries that apply to everyone apply to me. I brought this shame on myself. I hurt my wife, my kids, my mother, my wife’s family, my friends, my foundation, and kids all around the world who admired me.”

I’ll be honest: I was moved by Tiger’s confession. It is rare for celebrities to accept responsibility for their sins, understand the full scope of the damage they have caused, and express such remorse for their actions. At the end of the press conference, I tweeted: 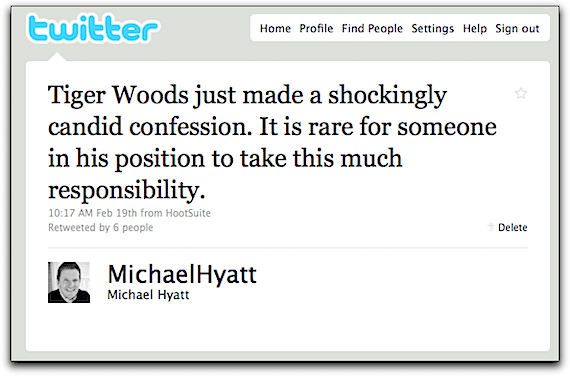 Almost immediately, I received several direct messages from people who thought I was naive. One person wrote, “It was totally scripted. I don’t believe a word of it.” Another said, “It was a PR stunt. He’s just trying to salvage his sponsorships. He will be right back at it once he’s away from public scrutiny.” Still another wrote, “If I were his wife, I would have dumped him long ago. I could never forgive someone who had cheated on me that many times.”

Maybe they are right.

However, during this season of Lent, my church prays an ancient and beautiful prayer by St. Ephraim the Syrian (ca. 306–373). It says,

O Lord and Master of my life, take from me the spirit of sloth, faintheartedness, lust of power, and idle talk.

“But give rather the spirit of chastity, humility, patience and love to your servant.

“Yea, O Lord and King, grant me to see my own sin and not to judge my brother, for You are blessed from all ages to all ages. Amen.”

Based on this, whenever someone confesses their sin as Tiger did, I have at least five responsibilities:

Tiger’s story is not that different than mine. Yes, it is perhaps more severe and more public. But in the end, sin is sin. It is only a matter of degree. “For all have sinned and fall short of the glory of God” (Romans 3:23). If there is hope for me—or for you—then there is hope for Tiger.

May God help him to find his way home and reconnect to the One who gave His life as a ransom for many (Matthew 20:28).

Question: How did you respond to Tiger’s apology? What do you think it means for you?
Disclosure of Material Connection: Some of the links in the post above are “affiliate links.” This means if you click on the link and purchase the item, I will receive an affiliate commission. Regardless, I only recommend products or services I use personally and believe will add value to my readers. I am disclosing this in accordance with the Federal Trade Commission’s 16 CFR, Part 255: “Guides Concerning the Use of Endorsements and Testimonials in Advertising.