Peace is a rare virtue in our modern world. Anxiety is commonplace. With civil unrest in the Middle East, protests in various U.S. state capitals, economic turmoil, and severe weather, there is plenty to worry about. 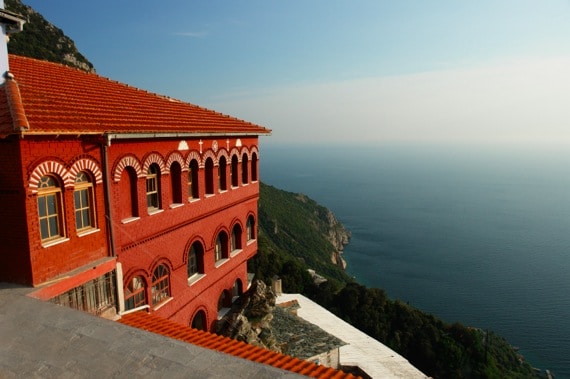 Today, I was thinking about how important is is for those leading in these turbulent times to be at peace and convey peace. It is the one thing people need now more than ever: calm, confident leadership. But where do you get that? It’s not something you can fake.

As I was thinking about this, I remembered a trip I took in the spring of 1994. ﻿I went on a spiritual pilgrimage to Mt. Athos, an independent monastic republic just southeast of Thessaloniki, Greece. I went with four friends for three weeks. It was an amazing experience—truly one of the top five of my life.

In case you don’t know, Mt. Athos is a major spiritual center for Orthodox Christianity. It is home to some twenty monasteries on a peninsula that, though connected by land, is only accessible by boat. The earliest monasteries on the “Holy Mountain” (as it is often called) date back to the 8th century.

During our time on Mt. Athos, we visited the ancient monasteries of Xenophontos, Iviron, Philotheou, Simonopetra, Gregoriou, and Agiou Pavlou. I have numerous fond memories of my visit there, but I keep returning to one near the end of our trip.

The last monastery we visited was Agiou Pavlou, or St. Paul’s, on the southern end of the peninsula, at the base of Mt. Athos itself. Though it sits back only a mile or so from the Aegean Sea, the snow-capped peaks of the mountains rise 6,700 feet behind it.

On the second day of our visit, we decided to hike down to the Skete of St. Anne, a smaller monastic community right on the water. We spent the day with two monks, one who made church candles to support himself and another, Father Nikon, who was a world-reknown iconographer.

He then asked us to sit and, as is the custom everywhere on Mt. Athos, he offered us some tea and pastries. We then had a wonderful, rambling conversation about the spiritual life. He exuded wisdom and grace. His personified love, joy, and peace.

Near the end of our visit, I walked out with him on the veranda of his house. It directly overlooked the Aegean Sea, which that afternoon was smooth as glass. It was absolutely gorgeous. After several minutes of drinking in the view and knowing my trip was coming to an end, I said, “I hate to leave, Father. It is so peaceful here.”

Fr. Nikon nodded, but did not respond. Finally, after a few minutes, he said, “You know, Michael, anywhere can be this peaceful, if”—and he paused for emphasis—“you have God in your heart. But if you don’t, then even a place as beautiful as this can be hell.”

As leaders it is critical, that we possess peace. In turbulent times, those we lead look to us to assess how they should respond to the vicissitudes of life. A calm and peaceful spirit communicates that we believe everything will be okay. God is in charge and will see us through.

Question: What has been your experience with leaders manifesting peace in the midst of extraordinary pressure? You can leave a comment by clicking here.
Disclosure of Material Connection: Some of the links in the post above are “affiliate links.” This means if you click on the link and purchase the item, I will receive an affiliate commission. Regardless, I only recommend products or services I use personally and believe will add value to my readers. I am disclosing this in accordance with the Federal Trade Commission’s 16 CFR, Part 255: “Guides Concerning the Use of Endorsements and Testimonials in Advertising.