by Michael Hyatt
Read 0 words in 00:00 minutes.
This is a guest post by Adrian Gostick and Chester Elton, authors of the New York Times bestselling book, The Carrot Principle. Their newest book, The Orange Revolution: How One Great Team Can Transform an Entire Organization, was just published yesterday by Free Press. As I write this, it is ranked #4 overall on Amazon—an extraordinary achievement.

For the past few years we’ve been studying breakthrough teams in some of the world’s most respected firms including Pepsi Beverages Company, American Express, Texas Roadhouse and Zappos.com. 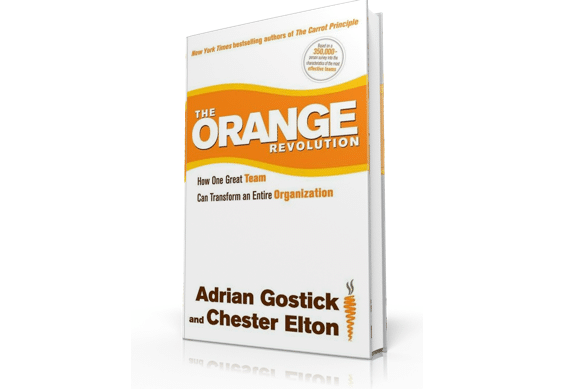 Predictably, we found that great teamwork is about such things as effective goal-setting, instilling performance measurements, and increasing trust levels; but it’s also about something much softer. Something surprising.

Great teams create a narrative. We witnessed it over and over in the most successful businesses we visited. As teams innovate, they tell their stories. They are partly their history, but they also explain to others who they are and why they do what they do.

Take this example told to us by Arte Nathan, senior human resources officer of the Wynn Resort & Casino.

Team chemistry is something Nathan—and owner Steve Wynn for that matter—takes very seriously. One legendary story in the Wynn organization is an experience the founder and his family had when on vacation in Paris. They were staying at a Four Seasons, and breakfast had been delivered to the room.

His daughter had ordered a croissant, but she only ate half of it, leaving the other half to nibble on later that day. Wynn and his family left the room to explore Paris. And, upon returning to the hotel, his daughter began thinking about that croissant. But when they entered the room, the pastry was gone, taken by housekeeping. She was disappointed. Housekeeping assumed the half croissant was trash. Or did they?

A light was blinking on the room’s telephone. It was a message from the front desk of the Four Seasons to the Wynn family. The clerk stated that housekeeping had removed the half croissant from the room, assuming that upon return the rightful owner of the croissant would prefer a fresh pastry. So the front desk contacted the kitchen to set aside a croissant, and room service was informed that upon request, they would need to deliver the pastry post haste.

“What makes this story so powerful?” asks Nathan. “The level of teamwork and communication between different departments is simply amazing. All participants understood the end game—customer satisfaction. And, everyone accepted their role in making the experience fantastic. These are the stories that Steve Wynn shares with his teams—and you can witness that level of teamwork at any of his properties today.”

For us, the Paris croissant is a powerful example of cultural storytelling. Any employee who hears it immediately knows what the organization means when it says “customer satisfaction.” The takeaway is not literal. No one thinks, Okay, when there’s a half-eaten croissant, be sure to leave a message with the front desk. Obviously, it’s a deeper understanding than that. It clearly means that employees are empowered to be creative, intuitive, thorough, and generous.

We also suspect that telling the story is a way to weed out prospective workers who simply don’t get it. Anyone who hears the croissant story and thinks that level of service is over the top is looking for work in the wrong place.

Breakthrough teams tell such stories frequently and with passion. It is a secret ingredient of their success. Stories are vital in helping individuals understand how world-class results are achieved and in making the possibility of doing so believable. Such tales have a way of perpetuating success. The listener retells the story and, more importantly, internalizes its message and becomes part of the story.

As a leader, here are some tips for modeling storytelling among your team members:

Nothing communicates your organization’s priorities and values like stories. Have you started collecting yours?

Note: I gave away 100 free copies of The Orange Revolution when I first posted this. However, that contest is now closed. I have away all the copies. Thanks.
Disclosure of Material Connection: Some of the links in the post above are “affiliate links.” This means if you click on the link and purchase the item, I will receive an affiliate commission. Regardless, I only recommend products or services I use personally and believe will add value to my readers. I am disclosing this in accordance with the Federal Trade Commission’s 16 CFR, Part 255: “Guides Concerning the Use of Endorsements and Testimonials in Advertising.